Cancer is the leading cause of death by disease past infancy among children in the United States.

The Michael Hoefflin Foundation seeks to provide Hope, Help, and Healing.™ to children and their families struggling with pediatric cancer. We work to educate the public and provide grant funding for innovative research to accelerate progress in the fight against pediatric cancer. 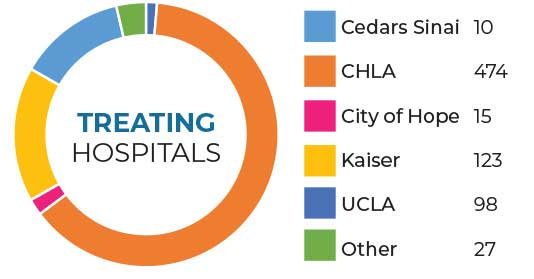 Funding research efforts will eventually lead to a cure. In the meantime, research can provide a sense of hope to those families struggling with cancer.

A particular area of emphasis for funding has been brain tumor research. Brain tumors are the second most common type of childhood cancer and they kill more children than any other form of cancer. Brain tumors also are difficult to treat because of their location, the many varieties of them, and their complexity. Unfortunately, the number of specialists qualified to treat pediatric brain tumors is limited.

By supporting the research undertaken in the Pediatric Brain Tumor Program at Children’s Hospital Los Angeles, the Foundation is addressing an area of critical need. Funding has been used to test treatment protocols for children with tumors in the supportive tissues of the brain. A separate funded study examines the impact of radiation and its side effects on young patients. Additionally, the Foundation sponsors a fellowship to train specialists in treating brain tumors. Another area of study focuses on developing a system for replicating different genetic variations of brain tumors, giving investigators the opportunity to gain a more accurate understanding of cancer at the molecular level and the potential to identify new genes that cause cancer.

The Michael Hoefflin Foundation also has made possible important projects undertaken at Children’s Hospital involving establishing tumor cell lines. Doctors extract cells from actual tumors and grow them in a laboratory where they can be used to test new medication and treatment therapies before being given to patients. The tumor cell lines continuously reproduce, giving researchers a never-ending source of cells on which research can be conducted. These cell lines are made available to researchers throughout the United States, as well as around the world through collaborative initiatives.

Given its limited resources, the Michael Hoefflin Foundation focuses on novel initiatives that have the potential to receive additional funding from the federal government or large private foundations if their initial efforts show promise. Three of the Foundation’s major grants, alone, which yielded positive results, have led to multi-million dollar research grants from the National Institutes of Health being awarded to Children’s Hospital Los Angeles and City of Hope to continue the promising research. In fact, from the nearly $2 million of seed-monies provided by the Foundation, more than $12 million in research has been additionally funded.

In this role, the Michael Hoefflin Foundation is advancing pioneering work on the cutting edge in the battle against childhood cancer. Each new advance moves doctors and researchers closer to a cure and makes healing a real possibility. That provides hope to patients, families, and doctors alike.